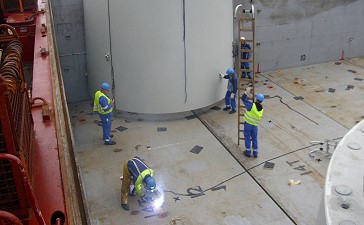 01.04.2011 - Rush Hour at the Southquay in Emden
There was an increased handling volume at the south quay in Emden on the 11th calendar week. 5 vessels with nearly 35.000 to of various general and bulk cargo had to be handled.

It started with the barge "AFHANKELIJK" which was loaded on behalf of BP Europa SE, Bochum with 1.500 to calcinated petrolcoke for Rotterdam.

Afterwards the vessel "MAXIME" discharged 2.000 to of pig iron from Antwerpen for the company GZO, whereof a bigger part was forwarded by rail towards Georgsheil by the end of the week.

By order of Enercon, Aurich the vessel "BONACIEUX" was loaded with 2.300 to of concrete tower parts.

Our agency looked after the vessels "AMNY EEMS" and "STONES" on behalf of the company MIBAU, Cadenberge. These vessels discharged 3.500 to respectively 23.000 to of norwegian grit and stones. 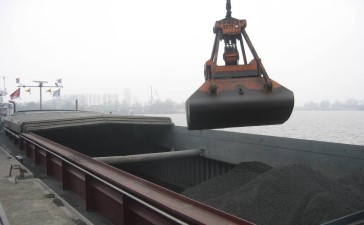