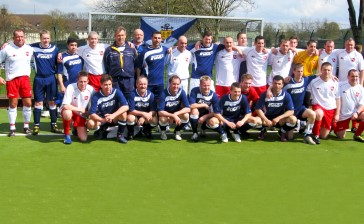 With a surprising victory in its pocket, but one that was well-earned at the end of the day, the EVAG / ELAG set off on the return journey to
Emden, after a fantastic match and modest victory celebrations.

We were pleased to accept the invitation by our business partner, and set off on 20th April 2012 with our team and a number of fans to the British Army base in Bielefeld. As the game got underway at 2 pm, the weather was a mixture of rain and sunshine. Our lads initially found it difficult to get into the game due to the unfamiliar AstroTurf pitch. But after what looked like the first goal for the British Army -- it was given offside -- the chances came thick and fast for EVAG / ELAG.
The home team counter-attacked time and time again, keeping the game open at all times, and put up a good fight throughout the whole match. At the final whistle of this extremely fair game, which was excellently refereed by an English official, the score was 4:3 for the EVAG / ELAG team. A fantastic team performance by our lads and the travelling fans, both during and after the game. Following a meal with home team and a modest victory celebration we said goodbye to our British friends, but not without organising a return match in Emden for this summer. To be continued ...