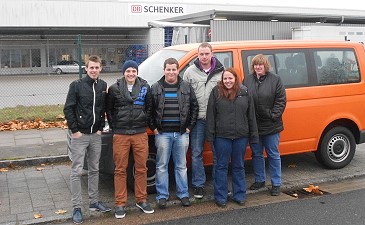 29.10.2012 - EVAG trainees at I-Park Bremen
On 29 October 2012 some of our trainees and their instructor visited the DB Schenker Bremen I-Park. They received a warm welcome from the local training manager and 4 trainees at the Bremen branch. After a PowerPoint presentation and a snack, the group toured the halls which have expanded in the 5 years since they were opened to include more than twice the original warehousing and picking floor space, and which now also employ twice the number of staff.

The facility performs more than 4 million picks per week, all of which are delivered just-in-sequence to the Mercedes Benz works nearby. The young visitors were really impressed by this performance. They were shown a fully automated, state-of-the-art small parts warehouse which handles up to three days of production output from the Daimler plant. Innovative ideas are also implemented at I-Park Bremen. They from classical legacy scanning with hand-held devices, through the Pick-by-Voice Project to the latest idea, electronic glasses that guide the user through the picking process with a head-up display on the left-hand side.

The trainees from Bremen handled the guided tour through the premises independently and made sure that everything was easy to understand. Once again, many thanks for this opportunity to the Schenker Team in Bremen!