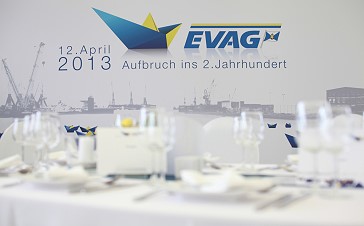 29.04.2013 - We are 100!
To launch a whole series of celebratory events in honour of EVAG's 100th anniversary, a large ceremonial act involving 200 invited guests from politics and business took place 12th April 2013 at the centre of Emden harbour, the "Middelmantje".

Numerous speakers outlined EVAG's historic and economic development and acknowledged the importance of our tradition-steeped enterprise for Emden harbour and the city of Emden.

The festivities continued on 13th April 2013 in the form of a public event for the people of Emden at the EVAG main building. Interested parties were able to network with EVAG staff in a relaxed atmosphere over a cup of East Frisian tea and some birthday cake. On top of this, there were prizes to be won in various games.

The fining glory was an evening event for all EVAG group staff in the marquee on the "Middelmantje" 13th April 2013. True to the EVAG motto, "Venturing into a 2nd century", our staff were soon in the right mood to tackle the next hundred years, and left the EVAG centenary celebrations in high spirits.