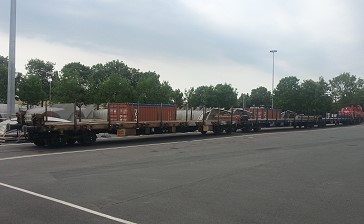 On June 10th 2014, the recently refurbished tracks at EVAG Terminal 2 were inaugurated with a trial run.
On the occasion of what was also the final acceptance of the track system, regular operations were simulated using a locomotive with several cars commissioned for the task.
The "maiden voyage" was a great success, as anticipated. This means that there is now nothing to prevent permanent use of the track system at EVAG Terminal 2.