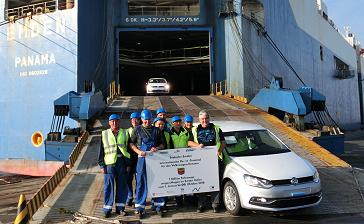 News
10.10.14 - One-millionth vehicle transhipped at the port of Emden

10.10.14 - One-millionth vehicle transhipped at the port of Emden

Earlier than ever before - the anniversary car came from Spain

The one millionth vehicle of the year was shipped on 6th October 2014 at the port of Emden in the new vehicle import and export transhipment. "Since 2007, this is the seventh time that we have succeeded in reaching the one million mark in one year. And for the fourth consecutive year, we have reached this figure as early as October. This year as early as the beginning of October. This makes us optimistic in terms of the annual figures." said Hans-Wilhelm Wildeboer, the Managing Director of Autoport Emden.

In the past week alone, more than 30,000 vehicles were imported and exported in total.

The one millionth vehicle this year is a silver Polo from Pamplona/Santander, Spain, which was disembarked from the 'EMDEN' and transported from Emden to its customer in Berlin.

In addition to the anniversary vehicle, the first Passat B8 models from production in Emden are being transported by rail, truck and ship some time soon.

To be able to adequately handle the rising import and export volumes in future, the Outer Ems dredging project the berth for large-scale vessels are of enormous importance to the development of the Port of Emden. Currently, these projects are still in the planning approval process, or in the planning phase by the project owners, the Federal Government or the state.

The dolphin berth with rear ramp is due for completion by Lower Saxony Ports in the second half of 2015.