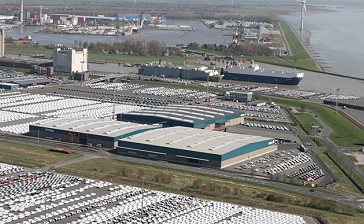 Last year, 1.31 million vehicles were transhipped at the port of Emden more cars than ever before. This beats the previous record of 1.26 million vehicles in 2012. In 2013, the transhipment volume was 1.23 million cars, which is equivalent to an increase of 6%.

Taking not just the port, but also distribution channels by rail or truck into account, automobile transhipment figures in Emden total some 1.5 million vehicles.

"We are delighted with these results which give us much confidence looking forward," says Manfred de Vries, Managing Director of Autoport Emden GmbH. He also expects steadily increasing transhipment figures for the current fiscal year. Autoport's target for the coming years is to continue to grow with the Volkswagen Group through sustainable structural development.

To allow this to happen, the dolphin berth is scheduled for completion this year. Talks with N-Ports and the State of Lower Saxony relating to building a new "America Pier" have been constructive. At the same time, Autoport is also pushing to ensure deepening of the Outer Ems to allow even larger car carriers with an even deeper draught to access the Port of Emden in future.