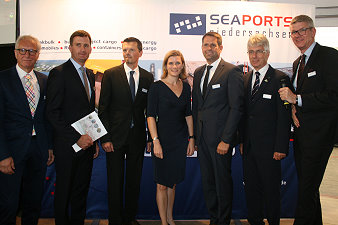 Brake, 2 September 2016 | To mark the 26th Lower Saxony Ports Day in Brake, Minister Olaf Lies today introduced the State Government's new perspective paper "Lower Saxony Port 2020". This is intended to provide a guideline for on-going, competitive port development in Lower Saxony. The paper was been drawn up in close consultation with the Lower Saxony ports industry.

Once again, Seaport's CEO, Inke Onnen-Lübben, welcomed more than 350 guests from industry, politics, administration and press to the Lower Saxony Ports Day, which took place today at the seaport of Brake. Once a year, the port marketing organisation of Lower Saxony's seaports stages this traditional gathering of the industry. In her opening speech, Ms Onnen-Lübben commented on the numerous influences that seaports need to face as an interface in order to provide service to the economy. The list included counted economic and technical aspects, as well as political decisions and society influences, such as decisions of the Federal Government on the Renewable Energy Act (EEG) or Brexit, and their impact on the ports and logistics industry. "Our seaports in Lower Saxony are perfectly positioned. Our port operations have been able to successfully establish themselves ? especially in niche markets ? and constantly expand traffic volumes over the years," said Ms Onnen-Lübben. However, to ensure and reinforce long-term competitiveness, further investments in the port infrastructure and hinterland connections are needed along with the necessary changes to the Weser and Ems waterways. Only in this way would Lower Saxony's seaports be able to effectively face competition, and sustain jobs and added value in the coastal region.

In his opening speech, the Mayor of the host town Brake, Michael Kurz, stressed the strong development of the seaport in recent years. As a hub for the transhipment of agricultural goods, the port of Brake has achieved major national significance. Mr Kurz pointed out that the ground- breaking ceremony for the 211n major road, with a view to optimising Brake's road link, had taken place just two days previously. Road links play a crucial role, especially for heavy-lift cargoes, which are increasingly being handled through the port, according to the mayor. Mr Kurz would appreciate a further dialogue with the Federal and State governments with a view to pushing forward with road renovations in the town in order to ultimately strengthen the port.

Lower Saxony's Economy and Transport Minister Olaf Lies presented the perspective paper "Lower Saxony Port 2020" in Brake, which the State Government developed in close collaboration with the ports industry. "Investment in the Lower Saxony Port are investments in the future. Only those who continuously and reliably invest in the future of our ports, like we do, can hope to ensure the competitiveness and performance of our universal port, the Lower Saxony Port," said Mr Lies. In this context, Mr Lies announced further millions in investments in port infrastructure. "In order to enhance the competitiveness and efficiency of the Lower Saxony Port in the face of global competition, we will be providing more than 194 million euros in state funding for the operation and expansion of our state-owned ports by 2020." The focus here is on expanding and improving the existing infrastructure. Mr Lies added that the state was continually pushing forward with the development of transport infrastructure in all modes of transport. "It is a good thing that the government has taken into account the major projects requested by Lower Saxony in the Federal Transport Infrastructure Plan, such as the motorways A20, A39, E233, the expansion of Lüneburg lock, and the Alpha E rail project, and intends to push forward with their implementation. What is important now is that the fairway adjustments of the Weser and Ems rivers can be implemented soon," said Mr Lies. Minister Lies sees growth potential in the Lower Saxony Port in particular in the energy sector, automobile transhipment, container transhipment and agricultural products. Looking at intra-European competition between ports, Mr Lies again demanded greater cooperation between the northern German coastal states, as well as improved networking and positioning at European level. Minister of the Economy Olaf Lies: "We need to, and will in future, become more actively involved in discussions to protect our interests at a European level. This is all about increasing our punch. To this end, greater cooperation is needed, especially with Hamburg and Bremen. The key to the close co-operation is the digitisation of the ports. "The common goal, according to Minister Olaf Lies, must ultimately be to establish more first ports of call at the North German ports.

During the panel discussion that followed, the new perspective paper was discussed with industry representatives. To this end, Olaf Lies talked to Karsten Dirks (Arbeitsgemeinschaft Niedersächsische Seehäfen (Lower Saxony Seaports Working Committee), Dr. Bernd Pahnke (DB Cargo AG) and Hendrik van Hettinga (Enercon GmbH) on strategies for achieving even greater competitiveness at Lower Saxony's ports. At the seaports themselves, the key challenge that remained was that of providing sufficient funds for maintaining the existing infrastructure, along with ensuring demand-driven expansion. In addition, of course, it was essential to adapt the hinterland connections. "In terms of expanding the transport infrastructure links to the seaports, Lower Saxony is excellently positioned in the new Federal Transport Infrastructure Plan with key projects such as the coastal motorway", said Karsten Dirks. "The Federation and the State now need to build more capacity in their planning authorities to ensure rapid implementation of the projects," as Mr Dirks continued. This was also emphasised by Hendrik van Hettinga, who added: "High-performance and robust supply chains are of strategic importance for ENERCON. The Lower Saxony ports thus play a decisive role in our global network." As a representative of an important mode of transport in port hinterland traffic, Dr. Bernd Pahnke stated: "Innovative business models and close cooperation between railway companies, ports and shippers allow further growth of rail freight traffic. This will boost competitiveness, also for the Lower Saxony ports."